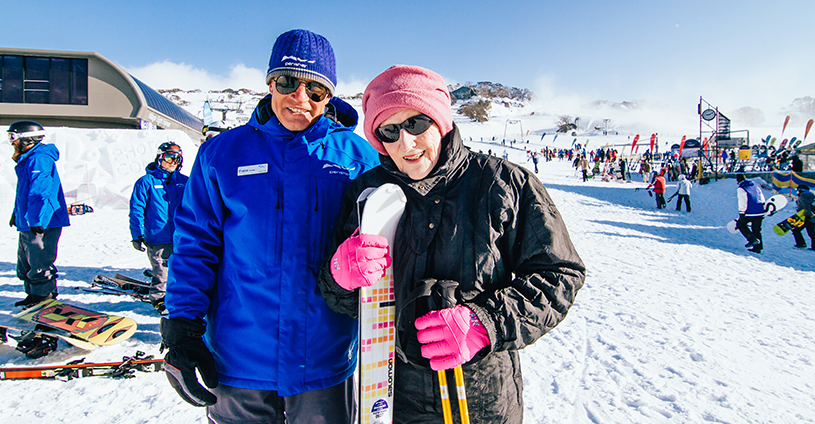 On the 9th of September Mrs Savage will turn 90 years old, which is a huge feat on its own but there is something even more spectacular about her, she still skis here at Perisher!

We sat down with Mrs Savage over a cup of english breakfast tea and asked her all about the stories she has racked up in her 50 years of skiing at Perisher, and boy did she have some stories to tell.

How she started skiing

Her husband, Mr Savage was a POW in Japan so never really liked the cold after his experience, so she was quite surprised when he suggested going to the snow. She wasn’t sure about it at first, she has always been a cautious person but she said “it wasn’t hard to talk me into it.” They both went and after the first day she was “hooked”.

Since then she has skied all around the world but always came back to Perisher as her home resort. “It suits me very well to come to Perisher; even if you don’t want to ski hard it’s still a lovely holiday.”

Mrs Savage had never heard of the new Freedom Chair in Guthega but said it has been years since she has been able to ski over there. The mention of Guthega did bring up memories of before the resort areas were interlinked. She said “the t-bar was run by the man at the shop and if he felt inclined to run it he would, but if he didn’t it wouldn’t run.”

She also stands by the fact that when she started skiing you had to be very tough to brave the elements. “You couldn’t drive to Perisher. You had to take the snow cat from Smiggins to Perisher Valley. You stood on this platform waiting for the snow cat while being exposed to the wind and snow. You had to be tough to ski in those days, oh it was cold!”

After becoming hooked herself, the Savages now have generations skiing at Perisher every year. Mrs Savage has six children, 12 grandchildren and five great grandchildren. “It’s a treat for the children to come down to the snow and we all ski together. Last season I brought my twin grandchildren down and they had a great time, they can’t believe I came without them this year!”

Losing her vision but not losing her love of skiing

Mrs Savage is also legally blind but she certainly wasn’t going to let her vision stop her. She claims “that’s just old age, it’s just a nuisance and I can’t do anything about it ... I don’t want to occupy the space so I make sure I go for a ski on each trip. It's second nature skiing, that’s why I can keep on doing it.”

Mrs Savage has had a guide for the last 10 years and while she can no longer spend the full day out skiing, she stays out for as long as she can with her old friend Franz (Pickles) Pichler, a Perisher ski instructor that has been teaching at Perisher for 50 years. “I’m old and don’t remember the names of things anymore, I go where Franz takes me.”

Her love of Perisher

“I’ve had a lot of sadness these last few years. I’ve lost a lot of loved ones but I came to Perisher last year and for the first time I had a feeling of joy, there is something about the mountain. It’s the atmosphere, the people and I think the snow has a nice romance to it.”

There are no secret remedies or creams to be able to ski at 90, Mrs Savage simply claims she has good genes but also strongly believes that being active certainly helps.

“If you are well and able to be active, do it. I walk everywhere if it is a sensible distance to walk. I’ve always been energetic; I have six children so you have to be with that many. I’ve also been blessed with good health.”

During her trip this season Mrs Savage and Pickles went over to Happy Valley to have some gentle runs down Snowy Trails before taking on Front Valley on their way back to the village. We went out with her to see her ski and were very impressed with her abilities and fearlessness.

After her ski she said she was off to have a strengthening drink, whether that was a tea, schnapps or brandy we will never know! What we do know is that she can still shred at 90.